Sigiriya or Sinhagiri is an ancient rock fortress located in the northern Matale District near the town of Dambulla in the Central Province, Sri Lanka. The name refers to a site of historical and archaeological significance that is dominated by a massive column of rock nearly 200 metres (660 ft) high. According to the ancient Sri Lankan chronicle the Culavamsa, this site was selected by King Kasyapa (477 – 495 CE) for his new capital. He built his palace on the top of this rock and decorated its sides with colourful frescoes. On a small plateau about halfway up the side of this rock he built a gateway in the form of an enormous lion. The name of this place is derived from this structure —Sīhāgiri, the Lion Rock. The capital and the royal palace was abandoned after the king's death. It was used as a Buddhist monastery until the 14th century.


Sigiriya today is a UNESCO listed World Heritage Site. It is one of the best preserved examples of ancient urban planning. 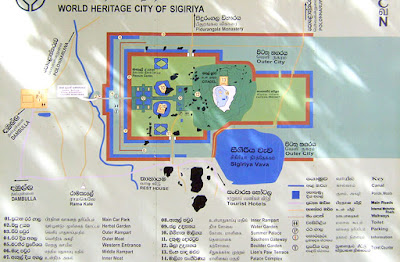 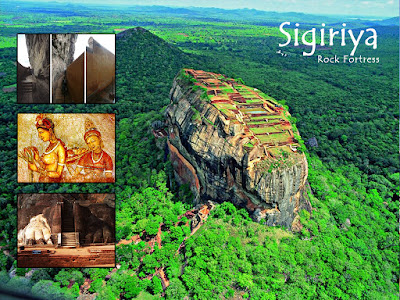 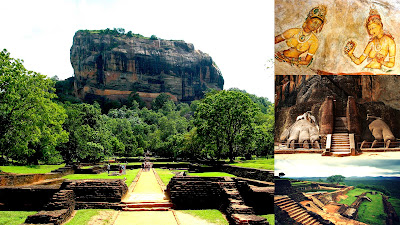 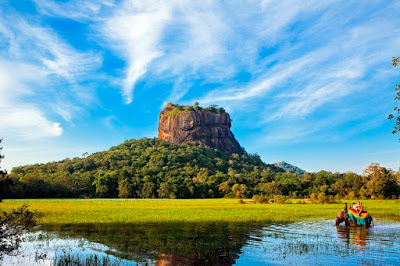 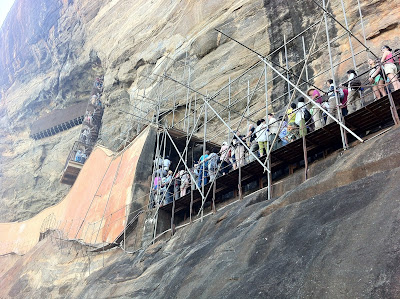 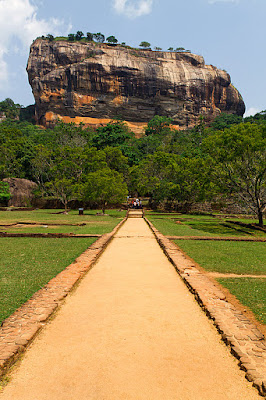 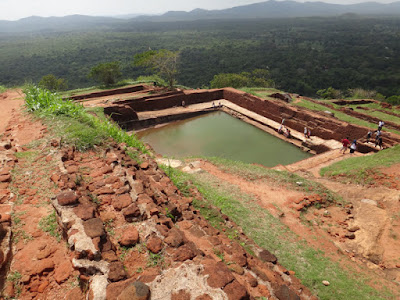 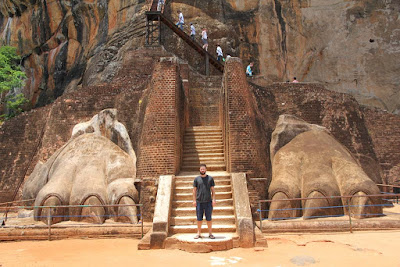 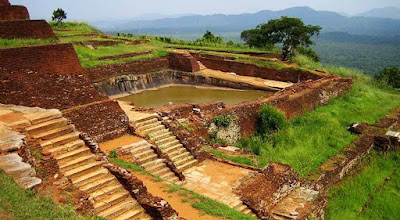 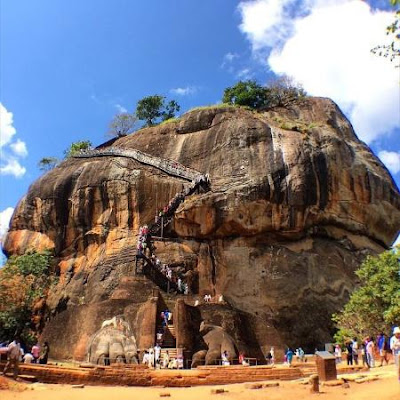 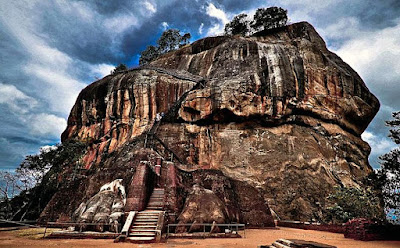 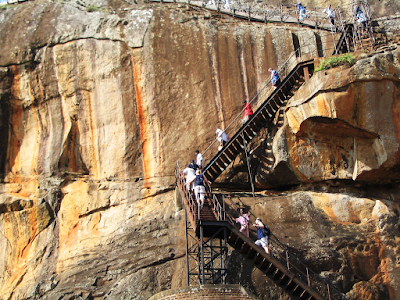 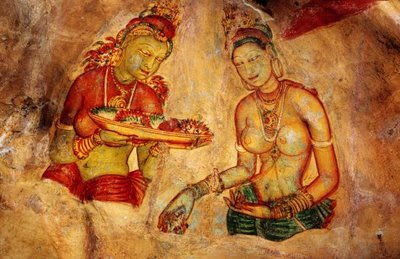 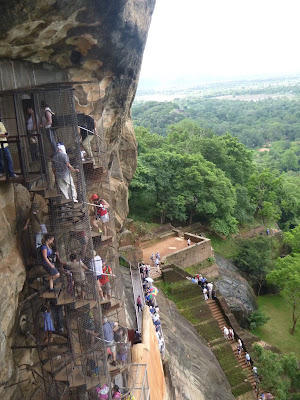 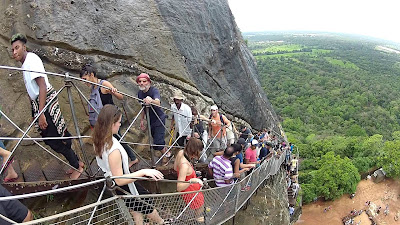 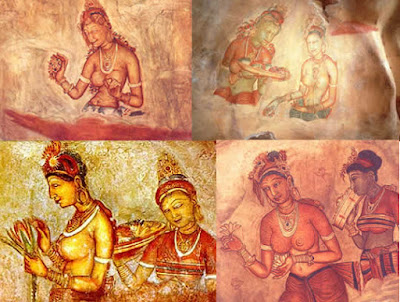 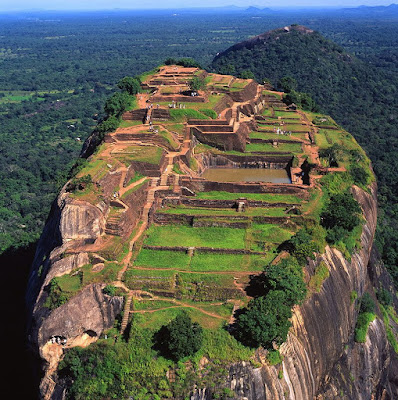 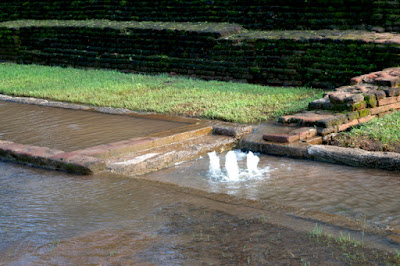 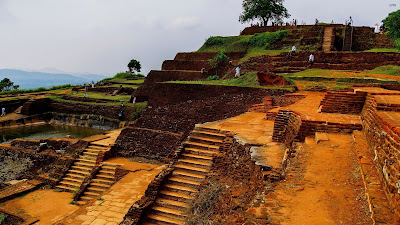 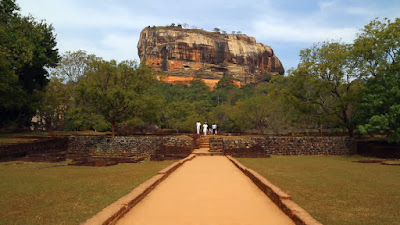 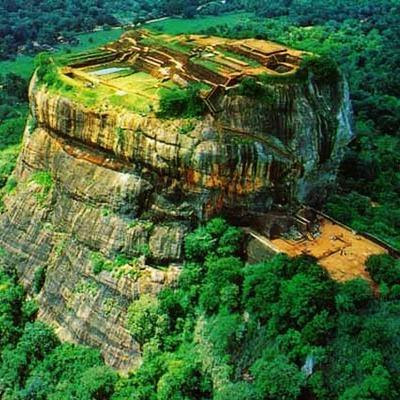 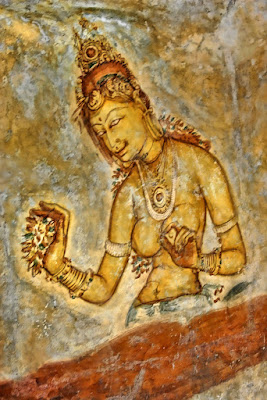 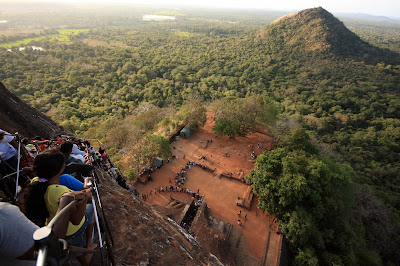 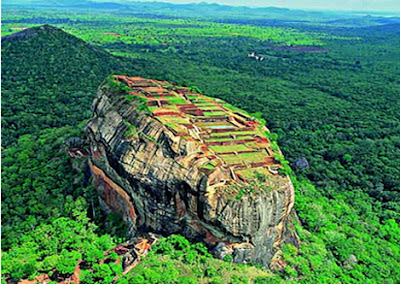 The environment around the Sigiriya may have been inhabited since prehistoric times. There is clear evidence that the many rock shelters and caves in the vicinity were occupied by Buddhist monks and ascetics from as early as the 3rd century BCE. The earliest evidence of human habitation at Sigiriya is the Aligala rock shelter to the east of Sigiriya rock, indicating that the area was occupied nearly five thousand years ago during the Mesolithic Period.

Buddhist monastic settlements were established during the 3rd century BCE in the western and northern slopes of the boulder-strewn hills surrounding the Sigiriya rock. Several rock shelters or caves were created during this period. These shelters were made under large boulders, with carved drip ledges around the cave mouths. Rock inscriptions are carved near the drip ledges on many of the shelters, recording the donation of the shelters to the Buddhist monastic order as residences. These were made in the period between the 3rd century BCE and the 1st century CE.

In 477 CE, Kashyapa, the king’s son by a non-royal consort, seized the throne from King Dathusena, following a coup assisted by Migara, the King’s nephew and army commander. The rightful heir, Moggallana, fearing for his life, fled to South India. Afraid of an attack by Moggallana, Kashyapa moved the capital and his residence from the traditional capital of Anuradhapura to the more secure Sigiriya. During King Kashyapa’s reign (477 to 495 CE), Sigiriya was developed into a complex city and fortress. Most of the elaborate constructions on the rock summit and around it, including defensive structures, palaces, and gardens, date from this period.

The Culavamsa describes King Kashyapa as the son of King Dhatusena. Kashyapa murdered his father by walling him up alive and then usurping the throne which rightfully belonged to his brother Moggallana, Dhatusena's son by the true queen. Moggallana fled to India to escape being assassinated by Kashyapa, but vowed revenge. In India he raised an army with the intention of returning and retaking the throne of Sri Lanka, which he considered to be rightfully his. Expecting the inevitable return of Moggallana, Kashyapa is said to have built his palace on the summit of Sigiriya as a fortress and pleasure palace. Moggallana finally arrived, declared war, and defeated Kashyapa in 495 CE. During the battle Kashyapa's armies abandoned him and he committed suicide by falling on his sword.

The Culavamsa and folklore inform us that the battle-elephant on which Kashyapa was mounted changed course to take a strategic advantage, but the army misinterpreted the movement as the king's having opted to retreat, prompting the army to abandon him altogether. It is said that being too proud to surrender he took his dagger from his waistband, cut his throat, raised the dagger proudly, sheathed it, and fell dead. Moggallana returned the capital to Anuradapura, converting Sigiriya into a Buddhist monastery complex,  which survived until the 13th or 14th century. After this period, no records are found on Sigiriya until the 16th and 17th centuries, when it was used briefly as an outpost of the Kingdom of Kandy.

Alternative stories have the primary builder of Sigiriya as King Dhatusena, with Kashyapa finishing the work in honour of his father. Still other stories describe Kashyapa as a playboy king, with Sigiriya his pleasure palace. Even Kashyapa's eventual fate is uncertain. In some versions he is assassinated by poison administered by a concubine; in others he cuts his own throat when deserted in his final battle. Still further interpretations regard the site as the work of a Buddhist community, without a military function. This site may have been important in the competition between the Mahayana and Theravada Buddhist traditions in ancient Sri Lanka.

In 1831 Major Jonathan Forbes of the 78th Highlanders of the British army, while returning on horseback from a trip to Pollonnuruwa, encountered the "bush covered summit of Sigiriya". Sigiriya came to the attention of antiquarians and, later, archaeologists. Archaeological work at Sigiriya began on a small scale in the 1890s. H.C.P. Bell was the first archaeologist to conduct extensive research on Sigiriya. The Cultural Triangle Project, launched by the Government of Sri Lanka, focused its attention on Sigiriya in 1982. Archaeological work began on the entire city for the first time under this project. There was a sculpted lion's head above the legs and paws flanking the entrance, but the head collapsed years ago.

Sigiriya consists of an ancient citadel built by King Kashyapa during the 5th century. The Sigiriya site contains the ruins of an upper palace located on the flat top of the rock, a mid-level terrace that includes the Lion Gate and the mirror wall with its frescoes, the lower palaces located behind the lavish lower gardens, and moats and ramparts which protected the citadel. The site was both a palace and a fortress. The upper palace on the top of the rock includes cisterns cut into the rock. The moats and walls that surround the lower palace are exquisitely beautiful.

John Still in 1907 suggested, "The whole face of the hill appears to have been a gigantic picture gallery... the largest picture in the world perhaps". The paintings would have covered most of the western face of the rock, an area 140 meters long and 40 meters high. There are references in the graffiti to 500 ladies in these paintings. However, most have been lost forever. More frescoes, different from those on the rock face, can be seen elsewhere, for example on the ceiling of the location called the "Cobra Hood Cave".

Although the frescoes are classified as in the Anuradhapura period, the painting style is considered unique; the line and style of application of the paintings differing from Anuradhapura paintings. The lines are painted in a form which enhances the sense of volume of the figures. The paint has been applied in sweeping strokes, using more pressure on one side, giving the effect of a deeper color tone towards the edge. Other paintings of the Anuradhapura period contain similar approaches to painting, but do not have the sketchy lines of the Sigiriya style, having a distinct artists' boundary line. The true identity of the ladies in these paintings still have not been confirmed. There are various ideas about their identity. Some believe that they are the ladies of the king's while others think that they are women taking part in religious observances. These pictures have a close resemblance to paintings seen in the Ajanta caves in India.

Originally this wall was so highly polished that the king could see himself whilst he walked alongside it. Made of brick masonry and covered in highly polished white plaster, the wall is now partially covered with verses scribbled by visitors, some of them dating from as early as the 8th century. People of all types wrote on the wall, on varying subjects such as love, irony, and experiences of all sorts. Further writing on the mirror wall now has been banned for the protection of the old writings.

The Sri Lankan archaeologist Dr Senerat Paranavitana deciphered 685 verses written in the 8th, 9th and 10th centuries CE on the mirror wall. One such poem from these long-past centuries, roughly translated from Sinhala, is:

"I am Budal [the writer's name]. Came with hundreds of people tо see Sigiriya. Since аll the others wrote poems, I did not!"

The Gardens of the Sigiriya city are one of the most important aspects of the site, as it is among the oldest landscaped gardens in the world. The gardens are divided into three distinct but linked forms: water gardens, cave and boulder gardens, and terraced gardens.

The water gardens can be seen in the central section of the western precinct. Three principal gardens are found here. The first garden consists of a plot surrounded by water. It is connected to the main precinct using four causeways, with gateways placed at the head of each causeway. This garden is built according to an ancient garden form known as char bagh, and is one of the oldest surviving models of this form.

The second contains two long, deep pools set on either side of the path. Two shallow, serpentine streams lead to these pools. Fountains made of circular limestone plates are placed here. Underground water conduits supply water to these fountains which are still functional, especially during the rainy season. Two large islands are located on either side of the second water garden. Summer palaces are built on the flattened surfaces of these islands. Two more islands are located farther to the north and the south. These islands are built in a manner similar to the island in the first water garden.
The gardens of Sigiriya, as seen from the summit of the Sigiriya rock

The third garden is situated on a higher level than the other two. It contains a large, octagonal pool with a raised podium on its northeast corner. The large brick and stone wall of the citadel is on the eastern edge of this garden.

The water gardens are built symmetrically on an east-west axis. They are connected with the outer moat on the west and the large artificial lake to the south of the Sigiriya rock. All the pools are also interlinked using an underground conduit network fed by the lake, and connected to the moats. A miniature water garden is located to the west of the first water garden, consisting of several small pools and watercourses. This recently discovered smaller garden appears to have been built after the Kashyapan period, possibly between the 10th and 13th centuries.

The boulder gardens consist of several large boulders linked by winding pathways. The gardens extend from the northern slopes to the southern slopes of the hills at the foot of Sigiris rock. Most of these boulders had a building or pavilion upon them; there are cuttings that were used as footings for brick walls and beams.They were used to be pushed off from the top to attack enemies when they approached.

The terraced gardens are formed from the natural hill at the base of the Sigiriya rock. A series of terraces rises from the pathways of the boulder garden to the staircases on the rock. These have been created by the construction of brick walls, and are located in a roughly concentric plan around the rock. The path through the terraced gardens is formed by a limestone staircase. From this staircase, there is a covered path on the side of the rock, leading to the uppermost terrace where the lion staircase is situated.

A big thanks for your appreciation. Will keep try to post more good post for all blog visitors.

If you have any suggestion please write me to - harshrex@outlook.com

The Eternal Flame Falls is a small waterfall located in the Shale Creek Preserve, a section of Chestnut Ridge Park in Western New York. A s... 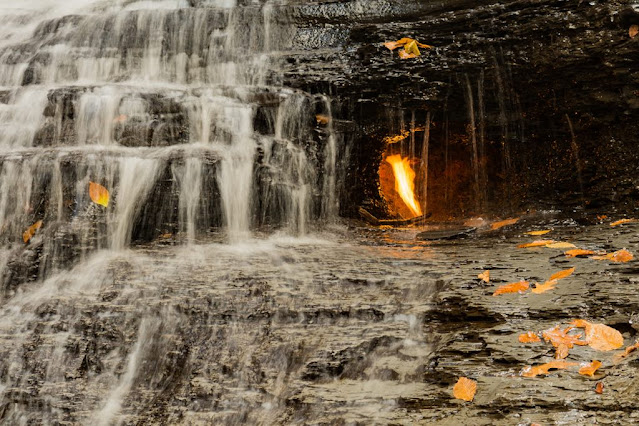